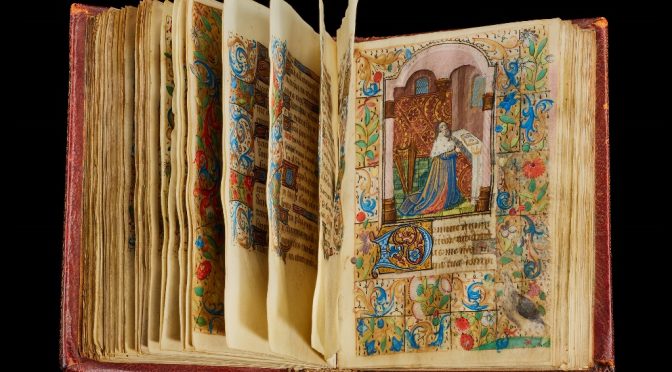 Books of hours are Christian devotional books containing sets of prayers and psalms. They were often made for personal or family use, and therefore represent the most common type of medieval manuscript book – so much so that they have been defined as the “best seller” of the Middle Ages. Books of hours were often illuminated – images had an exemplary and meditative function – and richly illuminated, as is the case with this manuscript owned by Birkbeck College.

The Birkbeck Hours was made in France in the fifteenth century, which is commonly considered as the golden age (and place) of the book of hours. Its structure is absolutely typical: it begins with a calendar of Church feasts, followed by extracts from the four Gospels, two popular Marian orations, the Hours of the Blessed Virgin Mary, the seven Penitential Psalms and a Litany of Saints, the Hours of the Cross and an Office for the Dead.

Written in gothic littera bastarda. Borders of scrolling against the outer margin of each folio, in blue, gold, red and black, often with lozenges with floral motifs on a ground of gold paint. Line fillers in blue and red patterned in white, with black contours and occasionally spots of gold, of various forms (mostly rectangular, but also elliptical and flower-shaped). Twelve 60 X 40 miniatures picturing, at f. 27, the Annunciation; at. f. 49, the Visitation; at f. 60, the Nativity; at f. 65v, the Annunciation to the Shepherds; at f. 69, the Adoration of the Magi; at f. 72v, the Presentation of Christ at the Temple; at f. 76, the Flight into Egypt; at f. 79v, the Coronation of the Virgin; at f.85, King David praying; at f. 101v, Christ on the Cross between the Virgin and Saint John; at f. 105, Pentecost with Virgin and Apostles; at f. 108v, burial with priest with two hooded weepers. On these same leaves, there are 4-line blue initials patterned in white on golden ground, with floral motifs inside, and the border scrolls frame the entire leaf. The decoration of the single sections is as follows:

Written in northern France (probably Paris or Reims) in the second half of the fifteenth century. Given to Birkbeck College in 1977 by Eileen Kaye, widow of Dr Charles Fox, Lecturer in Mathematics at Birkbeck between 1920 and 1951.

The confraternity of Saint Jerome and Saint Francis was founded in Siena (Tuscany) on 26 October 1427, modeled on Florence’s confraternity of San Niccolò del Ceppo. As in the case of many similar lay fraternities of the Middle Ages, its primary objective was the assistance within a religious framework to the poor of the city. The activity of the confraternity was connected to Siena’s hospitals, first the Spedale di santa Croce nella Castellaccia, then the Ospedale di santa Maria della Scala.

The ordinances were formulated at some unspecified time (“doppo alcuno spatio di tempo”) after the foundation. The material writing of this manuscript happened after 1434, because it is written that the ordinances were first approved by the bishop of Siena, Carlo da Gnolmo (1427–1444), and then, “eight years later”, by Pope Eugenius IV (1431–1447) during a stay in Florence. The manuscript was physically handled at every meeting of the confraternity, as one or more capitoli (rules) were read aloud.

ff. 3–20v: ordinances, divided in 12 chapters (capitoli), regarding the mores of the confraternity’s members; the acceptance of novices; the modalities of meetings; the visits to the sick members of the confraternity; the election of the rettore (a cleric supervisor) and of the confraternity’s officials; the collection and distribution of alms. All brothers were bound by a vow of secrecy, and every year each one of them could be excluded from the confraternity if at least two-thirds of the brothers agrred. “Capitolo primo. / Dell’onestà et buono co / stume … sca / ndalo alla compagnia, o / vero ad alcuni dela com / pagnia”.

Parchment, i+27 leaves (contemporary foliation on the top right corner of each folio, modern foliation on the bottom right corner); 280 X 195 (170 X 125) mm. Collation: i-28-16-15, with catchwords in the centre of the lower margin of the page. 2 columns of 27 lines, pale pencil ruling. Damaged by wormholes, especially in the initial and final leaves.

Written by one gothic hand. 2-line initials, alternately in red and blue penwork, with ornament of the other color (supplication initial at f. 20v is 3-line). Capital letters in the text filled with yellow. Titles of rules, absolution, evening- and morning office written in red. In the absolution, three red-ink crosses interval the words of the benedictions. In the offices, a number of capital letters is colored in red/blue, and written in red are the words describing the liturgy to be performed. Pencil maniculae at f. 4, 8, 9v. Corrections and additions by the scribe at ff. 7, 13v, 18; by other hands at ff. 4, 11.

Contemporary binding of wooden boards covered with brown leather; four bands; ten bosses, five for each cover, five of them missing; of two strap-and-pin fastenings, only the pins remain on the lower cover.

Written at Siena after 1434. Bought by Birkbeck College in the first half of 1959, probably at an auction.

Two records relating to this item are to be found in the Schoenberg Database of Manuscripts: Schoenberg_4088 and Schoenberg_11883.

This collection of dictums, mostly of ancient Greek and Latin philosophers, was compiled for the use of the monks of the Benedictine monastery of San Zeno in Verona. The monastery was a very important and rich one in the medieval and early modern periods. Throughout the Middle Ages it had a very strong relationship with the Holy Roman Emperors (who used to set up court there in their visits to Verona and northern Italy), and one of its abbots even appears in Dante’s Divine Comedy (Purgatorio, chant XVIII).

f. 40v-42: dicta from Aristotle’s Categories and On Interpretation.

Written in one gothic hand. The titles of the books from which the dictums are extracted are written in red. The first initial of the first dictum from each book alternates in blue and red (3-line, 4-line, 6-line, 7-line). Several capital letters in the text are filled in yellow. A small number of dictums is written in red (ff. 50v, 52v, 61, 61v). Sparse marginal annotations and underlining.

Bound in vellum on paper boards. The first and last leaf pasted to cover boards are re-used from a printed text .

Written in Verona in the fifteenth century. Pasted to the back of the front board is the ex libris of a Peter John Bruff. The manuscript figures in the catalogues of manuscripts on sale by Thomas Rodd the Younger (1796–1849) between 1836 and 1841 (“T. Roddi Catal.” is also noted at f. i v). In March 1851, William Henry Black (antiquarian and British Library reader, 1808–1872) bought the book from bookdealer George Bumstead in Holborn (f. i v: “Bought of Bumstead, Holborn, 6/3/51; f. ii: “Liber Guillelmi Henrici Nigri Londinensis, mense Martio 1851”). The book appears to have been on sale again at Sotheby’s in 1891. It was then owned by antiquarian and scholar R. A. H. Bickford–Smith (1859–1916), who bequeathed it to the Anglo-Hellenic League (founded in 1913), which in turn lent it to King’s College London: the dates of these transactions are unknown, as well as the date in which the book finally came to Birkbeck.

Dictys Cretensis’s Ephemeris belli Troiani (here De historia belli Troiani) and Dares Phrygius’s De excidio Troiae historia (here Historia de excidio Troiae) were, throughout the Middle Ages, the two chief sources of knowledge of the events of the Trojan war. For this reason, they were often copied together in medieval manuscripts. Dictys Cretensis (the legend goes) fought the Trojan war in the Cretan army of Idomeneus. Dares Phrygius figures in the Iliad as a Trojan priest.

The curator of this 1499 Venetian edition is Francesco Faraone (Franciscus Faragonius, c. 1460–c. 1525), a distinguished Hellenist active in Messina (Sicily). And in fact, the Venetian edition was preceded by one printed there in 1498 (by Wilhelm Schömberger). The choice of Venice was probably due to the success of the first edition. Not coincidentally, the Venetian publisher, Cristoforo Pensi (Christophorus de Pensis de Mandello) was a rather prolific printer – 113 editions between 1488 and 1505 – who specialised in scholarly titles of various kinds (medical, grammatical, rhetorical, poetical, historical), even though he did not disdain devotional and literary works for broader audiences. The dedicatee of this De historia belli Troiani is Bernardo Rizzo (Bernardus Riccius), a dear friend of Faraone: a lover of Greek culture, he conducted a political career in Messina, and financed the 1498 .

The book’s paratext is very rich, and includes a letter-prologue addressed from Lucius Romanus (first Latin translator of Dictys Cretensis into Latin) to Quintus Aradius, and a letter of Cornelios Nepos (who allegedly translated Dares Phrygius) to Sallustius.

One woodcut initial at f. h1. Gatherings a and b have annotations (mostly corrections of the Latin text).