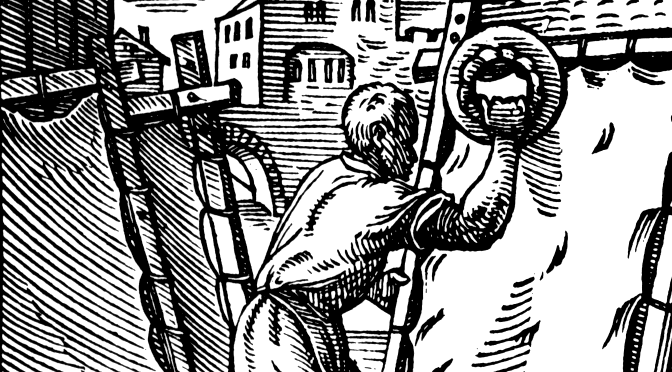 As someone who researches olfaction in the renaissance, I’ll confess that vellum catches me off guard. I notice first its velvety smoothness, distinct from other archival materials. The difference is palpable: it is skin. That sensory shock is like others, utterly banal when one considers that most Renaissance books in archives today are bound in leather and yet still surprisingly visceral. It’s then that I notice its smell—distinctive, hard to describe, clinging to my hands after I leave the archive. Animalic, not unpleasant, faint, and unsettlingly familiar. It is skin.

Very young skin, to be exact, that is now very old. From the latin vitulinum and old french vélin, vellum denotes calfskin, though the term often refers to parchment made from sheepskin, goatskin, and perhaps even deerskin, pigskin, squirrel skin, and fish skin. Its supple beauty as parchment belies the sacrifice that came before it, a sacrifice not only of animals (some medieval books required over 500 animal skins to make) but also of humans. This sacrifice can sometimes be seen in the parchment itself. Blood in the animal’s skin at the time of death reveals itself as veins in the finished product, indicating that the animal was hunted and killed rather than slaughtered in a butcher house. Parchment-making was also difficult and skilled labor. Parchmenters collected preserved skins, selected the very best, and then endured the stench of lime-soaked flesh in colder climates and rotting flesh in warmer ones as they worked to transform it into parchment, scraping the hair and fat off of it before stretching it. The act of stretching wet skin as it dries realigns the three-dimensional structure of fibers into a flatter surface closer to the skin itself. The result is a material that is much stronger than leather when dry and much more vulnerable to moisture.

Environment is everything. Too wet and its collagen breaks down into gelatin. Too dry and it becomes brittle and easily breakable. Its smell will tell you a lot about its condition as well as where it has been. For instance, John of Gaunt in Shakspeare’s Richard II (1595) compares England to a book bound in shame “with inky blots and rotten parchment bonds.” In his “Treatise Concerning the Arte of Limning” (1598-1603), Nicholas Hilliard compares the very best vellum to the smoothness of “sattine” and goes so far as to suggest that one should only paint its surface in a space “wher neither dust, smoak, noise, nor steanche may offend.” But its smell can also deceive. The narrator in Thomas Dekker’s Lanthorne and Candlelight (1608), for example, warns readers of rogues, who specialize in selling poorly plagiarized books as expensive originals. Though the books are “engrossed in vellum, parchment, or Royall paper,” the work was copied out in an alehouse by an “impudent, ignorant fellow that runnes up and down with the Transcripts.”

Dekker’s warning raises questions about the sensory effects of vellum. But what kind of warning is it? Hilliard’s treatise was written on vellum; Dekker’s was printed on paper. Do such differences matter? What happens if we approach these texts not only as literary and cultural artifacts but also as olfactory ones? Does the smell of Hilliard’s treatise disrupt our understanding of his preference for vellum’s arid smoothness as somewhat fussy? And what of Dekker’s pamphlet, printed by a second-rate printer on cheap paper, also dedicated to a gentleman? Does its smell reveal a new way of understanding his dismissal of the sensory pleasures of better quality materials? Does it render it ironic? Put simply: what happens if we don’t just read Hilliard or Dekker’s books again and again but sniff them?

What I hope to suggest is that, if nothing else, the smell of vellum offers a material and visceral reminder that what we mean by the phrase “old books” varies greatly. The smell of vellum is rarely included in the usual paean to the smell of old books, especially those of pulp-based paperbacks (for which there are even a few fantastic perfumes that mimic it). The olfactory play on skin as medium is perhaps a bit too unsettling, even for perfume lovers, collapsing quickly into dark thoughts about anthropodermic bibliopegy. (Though a few servants in early modern drama embrace such a turn: Dromio of Ephesus in Shakespeare’s Comedy of Errors reminds his master Antipholus that although he does not remember striking Dromio, the mark of the blows remain on his skin like ink on parchment.) It’s also hard to generalize about the smell of vellum: each piece has its own unique aroma that denotes both its origins and its history. Its slightly spongy surface, especially on its flesh side, tended to absorb grease from handling it, so it was often dusted with pounce, chalk, ash, even powdered glass mixed with bread. But we smell it now as an amalgam of provenance, use, and preservation. Its perfume is both animalic and bibliophilic.

It’s easy to understand why the smell of new vellum is one of Hermione Granger’s favorites in the Harry Potter series, and why it is the scent that is most often used in historical novels to signal a medieval setting vastly different from our own. For those like me who encounter it in archives and libraries attuned to care and preservation (including relying on digital imaging as a way to protect the most fragile and rare manuscripts), it’s hard not to wonder about libraries and scriptoriums of the past and their smell. The rare book room comes close with its aroma of cedar-scented leather thongs, iron pegs, linen thread, wooden frames, traces of pounce, lampblack, glue, goldleaf, and perfumed leather, but it is also modern, with the smell of deodorant, plastic, pencils, notebooks, synthetic fabrics, and silicon mixing with those of the past. Key notes are (hopefully) missing: the stale air of book closets, the breath and sweat of scribes, and the smell of dust, mold, and fire.

For most of us, the experience of smelling vellum is rare and limited to the library (that wedding invitation you received most likely smells of cotton dipped in formaldehyde). Yet, even when it is only imagined, its smell evokes our deeply material connections to books, rooted in the sensory and aesthetic pleasures of reading. The smell of vellum varies and will continue to vary, absorbing the aromas of its environment even as it reveals traces of its past. Its skin, like ours, tells a story of contact. It is an intimate history of use, one we’ve only begun to grapple with as part of the complex history of books. But it is one richly redolent with possibility.