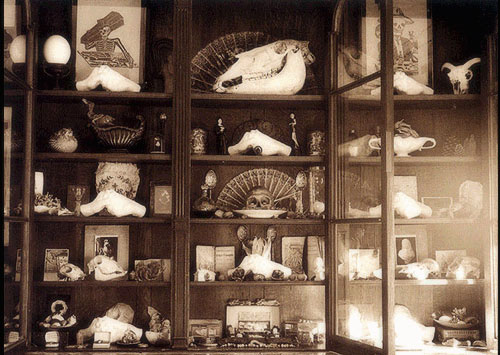 The artist Jane Wildgoose describes her remarkable, ever-evolving Wildgoose Memorial Library as having developed out of ‘an informal collection of objects and books relating to [her] enduring fascination with the interest of the dead to the living’. Certainly, the library, with its cabinets teeming with skulls, death masks, locks of hair, stuffed animals, jewellery and fading daguerrotypes, is an extraordinary essay on the variety of the memento mori. But it is clear also that its presentation – the cabinets and glass cases, the clear sense of order underpinning the excess, the attention to lighting – is as integral to the work than the curios themselves, more so indeed than any single artefact. As well as being a work about death, it is a work about the process of curation – of collecting and exhibiting – and the importance of these in determining the emotional effect of the objects themselves.

It seems natural then that in her essay ‘A Visit to the Archive’ Wildgoose should be concerned with the affective power of the book-as-object, the physical form containing and organising the text we read. She frames this step from her home territory of the funerary object to the book by means of an epigraph from Thomas Browne’s Urne-Buriall, perhaps the most celebrated of English meditations on mortality: the aged, rarely-consulted volume, delivered up from the darkness of the archive, mirroring the ancient sepulchral urns whose disinterment catalysed Browne’s ruminations.

Wildgoose recounts a visit to the Royal College of Surgeons Library at Lincoln’s Inn Fields. She is there to see the correspondence of William Henry Flower, who was Conservator of the Hunterian Museum in the late nineteenth century and, most pertinently for Wildgoose, was a collector of skulls ‘in quite extraordinary numbers – from graves in Empire’s remotest corners’. The dematerialised form of the library’s online index ‘miraculously transmigrate[s]’ into the substantial when the desired volume arrives, as Wildgoose puts it ‘in the flesh’. Death’s presence is threefold: the letters are ‘accounts of the business of the dead’ (the accumulation of human skulls for Flowers’s craniological research), sent by ‘men long deceased’ and now ‘bound in the skin of some long dead animal’.

Wildgoose’s writing is carefully resonant. The short essay is organised around quietly suggested parallels. The digital index of the archive’s catalogue is set alongside the evocative power of the book which ‘calls up’ the memory of Wildgoose’s father’s death three decades before. It is the material sensations of the archive – the ‘faint dry smell’ released when turning the pages of her volume of letters – which transport her to the Sussex of her childhood. As with the cabinets of the Memorial Library, the concern here is with the relationship between framing and emotional response. The book’s contents are shot through with death, but it is their physical form – the scent of the book – that shapes this theme into a personal, affective reaction. 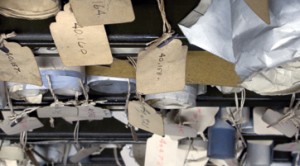 The essay accompanies a series of photographs by Roelof Bakker taken inside Hornsey Town Hall. The town hall in north London, one of the earliest Modernist municipal buildings in the UK, was vacated in the 1980s when the borough of Hornsey was incorporated into Haringey, its furniture and fittings left behind in the move. In Bakker’s photographs, we see the contents of the town hall’s strongroom, a trove of dossiers and architectural plans, once important enough to warrant the security of a locked vault, now unwanted, an abandoned archive beneath three decades of dust.