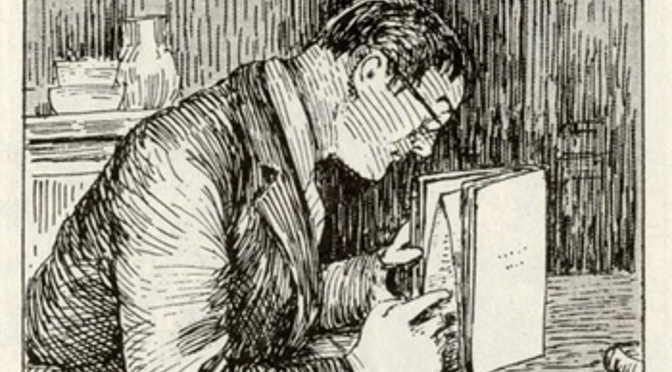 ‘Knew when to stop too – didn’t cut the pages.’
-The Great Gatsby 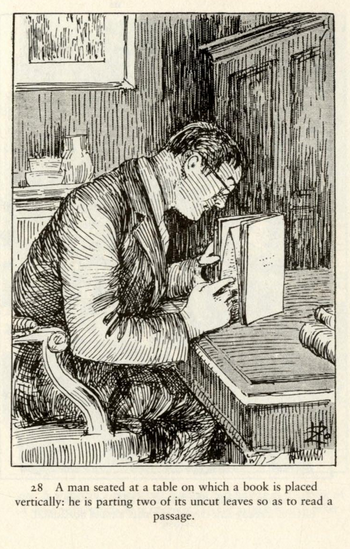 Here’s one of the illustrations to Raymond Roussel’s poem Nouvelles Impressions d’Afrique (1932), one of fifty-nine engravings which Roussel commissioned for the work from the artist Henri-A. Zo. To Zo’s frustration, Roussel had engaged his services anonymously via the intermediary of a detective agency, Agence Goron, supplying Zo not with the whole poem, but with a series of discrete one-sentence descriptions of what was required in each image. The result is a set of images which, as one might expect, often seem somewhat uncanny, at a slight remove in their relation to the poem itself.

Zo’s brief for this particular drawing was: ‘A man seated at a table on which a book is placed vertically; he is parting two of its uncut leaves so as to read a passage.’ It’s certainly an unusual mode of reading, and in Zo’s representation we can surely get a sense of a curious eroticism at work: it’s there in the setting – a man alone in his study, a space cleared on the desk for his special book; in the tactility with which he holds the pages spread with his fingers; and in the glazed passivity of his expression – the pornographic gaze: a rictus half-smile masking absorption: the interior pleasure of the solitary viewer. This is a mode of reading which acts out Roland Barthes’s famous rhetorical question: ‘Is not the most erotic portion of a body where the garment gapes?’ Barthes answers his own question with some examples:

The intermittence of skin flashing between two articles of clothing (trousers and sweater), between two edges (the open-necked shirt, the glove and the sleeve); it is this flash itself which seduces, or rather: the staging of an appearance-as-disappearance.

In Zo’s image, the pleasure of the text is indeed in its intermittence: the between-two-edges of a passage obscured by the very paper on which it’s printed.

The lines which Roussel intended Zo’s image to illustrate come from one of the poem’s long list sections, in this case a list of correspondences, where something large and something small share a certain characteristic. Here, Roussel is likening the reader who peers between the uncut leaves of a book to a mother who peeks between the curtains of a cradle:

[ …when a mother daringly
Opens a cradle, its white curtains, for two leaves
In an uncut book one prises apart.] (Mark Ford)

Daringly is a striking word here, even if we didn’t know about Roussel’s extraordinary mother-relationship: it sexualises the scene, accusing the mother of bringing a brazenness to her Fort-Da play with the child. The nominal formulation in the French is even more suggestive: oseuse, from oser, to dare: thus, a woman who dares (just as poseur, from poser, is a man who poses). Her twin roles then are listed side-by-side: ‘mère, oseur’: ‘mother, darer’. Barthes’s sense of the erotic as the ‘staging of an appearance-as-disappearance’ could hardly more explicitly represented: in Roussel’s table of comparisons the appearance-disappearance game of the brazen mother, using the curtains of the crib as theatrical props, becomes the writ-large equivalent of the book as portable peep-show.

To make things even stranger, Roussel’s lines and Zo’s illustration appear to be self-reflexive: the book best-suited for this model of reading-as-peering is Nouvelles Impressions d’Afrique itself. Roussel’s poem is a long one by any measure, yet after fifteen years of creative effort, at fifty-nine pages long it still fell somewhat short of the book-length work its author had envisaged. Commissioning a set of illustrations, then, offered a way to pad the text out, and to redouble the effect Roussel took the unusual step of leaving all left-hand pages blank, while on the recto side the poem and the illustrations appeared on alternate pages. The fifty-nine page poem thus becomes a work of two hundred and thirty-six pages, and since the top edge of the paper was uncut, if one wanted to see any of the illustrations one would either have to cut the pages, or to hold the sheets open and peek between them in the manner described. When we look at image #28 then, holding the pages open to watch our man holding the pages open, perhaps he too is peering at another reader, a smaller man, peeping through a tiny Nouvelles Impressions d’Afrique in an infinite regress. (And yet – this slight disconnect between image and text again – in Zo’s illustration we can tell that this is not the book which the man is reading: there is writing on the verso sheet, and besides Roussel’s brief for the artist explicitly states that the man is peering between the uncut pages not to view an illustration but ‘so as to read a passage’ [‘pour y lire un passage’].)

There are, to my knowledge, three English translations of Roussel’s long poem (one is really a composite: Ken Koch’s mid-sixties translation of Canto III was supplemented in the late-nineties by Andrew Hugill’s working of Cantos I, II and IV). Of these, Mark Ford’s, which eschews the rhyme and metre of the original for greater fidelity to the sense, is the most satisfying both as a poem and as a translation. And yet, in its presentation it comes as a straightforward octavo edition with its edges pre-cut and the verso pages used for explanatory notes and the original French text. Alongside it, then, textual materialists will need a copy of Ian Monk’s version, published by Atlas Press, which comes as the original 1932 Lemerre edition original would have, with its top edges uncut, so that we might, if the mood takes us and there’s no-one around, find a quiet space to set the book upright on the table and, holding the pages gingerly open, peep through at Zo’s uncanny illustrations.